Charlottesville! What Do We Need?

What is happening in Charlottesville? We know what’s happening in Charlottesville! Again, factions of our society have chosen some one, some event, some thing to rally around and espouse their opinions and beliefs-prejudices and ideologies perhaps. And, again, being the diverse peoples that we are, opposing factions have rallied in protest. And again, mutual respect and rationale thinking has been replaced with anger, hate, and violence. And again, sacred lives have been injured and killed. When will we learn that we must come to respect human life, be respectful in our disagreements, and seek peaceful cooperation and co-existence with one another? Succumbing to violence harms us all, physically and/or morally, and contributes to the decay and demise of our nation.

The “thing” that has become the rallying point in Charlottesville, and other places, is a statue. In this instance the statue of Confederate General Robert E. Lee, a prominent figure in our nations history during the Civil War. The debate over removing the statue is burning! Proponents for removal argue the statue is a symbol that honors Lee, the Confederacy, the enslavement of hundreds of thousands of African Americans, and memorializes racism. Proponents for keeping the statue argue it honors our Southern Heritage.

It is a statue-mere bronze and stone. Although Charlottesville officials report it will cost $330,000 to remove it, it has no value compared to a human life. It is a statue the primary purpose of which is to make us remember. Yes, we need to remember the Civil War-slavery, succession, reconstruction. We need to remember the misery, the suffering, the cruel, inhumane treatment of our African American brothers and sisters, the families broken and destroyed, the deaths both off and on the battlefield. We need to remember and embrace this portion of our national history as the horrific and tragic era that it truly was. We, white Americans, need to confess and repent for the sins of our fathers and perhaps in some degree our own-the sins of fostering white supremacy, either intentionally or unintentionally, and subjugating African Americans to the horrors of slavery and oppression. Out of genuine confession and repentance, can we ask for forgiveness? In no way being able to know the experience of my African American brothers and sisters, I dare not speculate on what they might need.  Could we not rally, even around the statue, for these purposes? With remembrance and repentance,  can we then refocus on hope and healing amidst our national values- truths that we hold to be self evident, “that all men are created equal, that they are endowed by their Creator with certain unalienable rights, that among these are life, liberty and the pursuit of happiness.”? 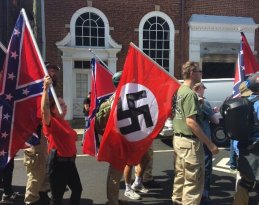 What’s happening in Charlottesville is reported as “white nationalist” rallying around the Lee statue honoring “Southern Heritage.” Really! I don’t think so! Folks are carrying Nazi flags, chanting “blood and soil,” as well as “Jews we will replace you.” Doesn’t look or sound at all like “Southern Heritage.” One might ask, “What nation?” Maybe shades of another nation bent on white supremacy in another horrific and tragic historical era, and hopefully not our nation of America today.

And, by the way, I don’t know that the presence or absence of a statue is going to change hearts and minds one way or the other without the presence of meaningful relationships and community. We need a narrative change, a paradigm shift. We need to remember, repent, forgive, and refocus on hope and healing grounded in our national self-evident truths.