I went into our Tyler Public Library this morning to take some photos of our East Texas PFLAG June PRIDE Month display. In between shots I stepped away to make some camera adjustments. As I did this I noticed a young girl—the library was swarming with children for story time—maybe three to four years old, enter the library and make a beeline to the display case. Apparently she was not new to the library or the display case that is always filled with information or projects related to local organizations. Good for you, Mama! I assumed the young woman right behind her was her mother. 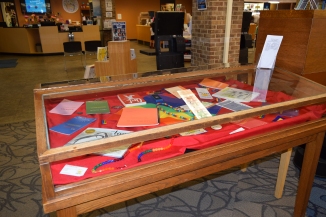 The little girl placed her hands on the edge of the case and stood on her tiptoes as she looked at its contents. Mama was standing quietly behind her and looking as well. Inside the case, displayed over a red cloth and rainbow flag, was an assortment of booklets and pamphlets published by our National PFLAG (formerly known as Parents, Families, and Friends of Lesbians and Gays) organization. Some of the titles included: Faith in Our Families, Safe Schools, Our Trans Loved Ones, Be Yourself, Our Daughters and Sons. There were also various buttons and decals with words and symbols promoting diversity and equality. Also included were a couple of family/children’s books, A Day in the Life of Marlon Bundo, And Tango Makes Three. 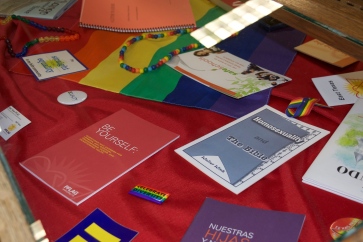 After a few moments on tiptoes, the little girl reached up and mama picked her up. “Oh, you can’t see.” They continued to look at the display. I remained at a distance and overhead this bit of conversation:
“What is that?” asked the little girl.
“It’s equality,”
“What does that mean?”
“It means being fair to everyone,” answered Mama. My thought, Good answer, Mama! There was some indecipherable conversation, and Mama said, “But we can’t take the bunny book (Marlon Bundo) out of the case.” They walked away from the case, and I moved up and finished the photos. I was thrilled. I couldn’t wait to share what I had just witnessed.

A bit of the backstory might shed some light on why I was so elated with this small interaction between child and parent. This is the fourth year that the public library has had some type of LGBT display during June PRIDE Month. Three of these years—2015, 2016, and 2018—PFLAG has been responsible for the set up with the contents pretty much the same. The only additions this year were the two family/children’s books. In 2017 the library staff set up a display of library books on LGBT issues.

Tyler is a city of approximately 100,000 residents in conservative Smith County in east Texas. 2016 was the only year that the display was not the target of opposition from a small yet vocal number of library patrons. Other years when complaints were lodged, the city administrative personnel directed the library staff  to move the display to a less trafficked area of the building. Actually, the first year, the display was summarily dismantled; however, after an outcry and a barrage of phone calls and emails to city hall, it was restored; yet still moved. Last year, there was only one complaint lodged claiming that many of the library’s displays are not informational but reflect social agendas that are not necessarily inline with community standards. After this complaint the book display had to be moved upstairs. A consistent complaint each year is the location of the display—purported to be “too close” to the children’s section.

My initial response in 2015 to the “too close” to the children’s section complaint was:

I would think that if a child were old enough to be inquisitive and ask a question, then this would be a wonderful opportunity for parenting. The parent(s) could answer the child’s questions and offer information and guidance as they, the parent(s), deemed appropriate.

That is still my opinion today, and I was thrilled to the point of joy as I watched this morning’s interaction play out before me and heard the mama’s truthful, age-appropriate response to her child’s question, “What is equality?”

“It means being fair to everyone.” Good answer, Mama! Great parenting!

Many thanks to our library staff for continuing to be a center for learning and informational resources as well as a beacon of inclusiveness and equality in our community. I wonder how many complaints will be lodged this year??